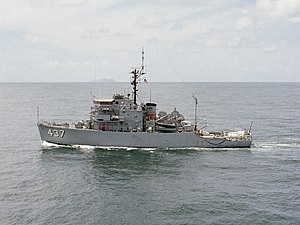 USS Enhance (AM-437/MSO-437) was an Aggressive-class minesweeper acquired by the U.S. Navy for the task of removing mines that had been placed in the water to prevent the safe passage of ships.

From her home port, Long Beach, California, Enhance operated along the U.S. West Coast on training and exercises in mine warfare. She sailed from Long Beach 1 October 1956 for her first tour of duty with the U.S. 7th Fleet in the Far East. During that fall's crisis over the Suez Canal, Enhance patrolled in the Sea of Japan, recording the movement of shipping, as part of the intensified alertness required of the Navy during periods of international tension anywhere in the world. She returned to Long Beach 12 April 1957 and resumed her west coast operations.[1]

During her second Far Eastern deployment, from 2 April 1959 to 16 October, Enhance joined in exercises with minecraft of the navies of the Republic of China and the Republic of Korea. Returning to west coast operations, on 8 January 1960 she rescued four men from an overturned sailboat off Long Beach. In June 1960 she visited Portland, Oregon. Enhance spent the remainder of the year conducting type training and undergoing overhaul at San Diego.[1]

Left Long Beach, California in 1971 after an overhaul for operations in Vietnam in December 1972. Swept mine fields of Vietnam to clear Harbors.[citation needed]

Enhance was decommissioned in 1991 and struck from the Navy list in 1992. She was sold for scrapping in 2000