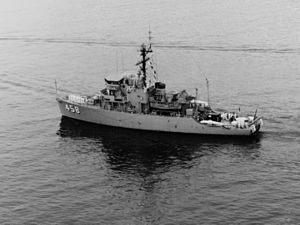 Ther are numerous links in this article that will take you out of the Guides website, please click your back button to return to this article

USS Lucid (AM-458/MSO-458) is an Aggressive-class minesweeper acquired by the U.S. Navy for the task of removing naval mines that had been placed in the water to prevent the safe passage of ships. She was launched soon after the Korean War, sailed on four Western Pacific (Westpac) cruises and served two tours in Vietnam during the Vietnam War. Lucid was decommissioned at the end of 1970 and placed in mothballs after only 15 years of service, as the Vietnam War was winding down and there was no longer a need for a large fleet of minesweepers. She was purchased by civilians and served as a houseboat for ten years before being sold again and used as a warehouse in the Sacramento Delta. In 2005, Lucid was acquired by a foundation seeking to save a ship of this class and is now undergoing restoration as a museum ship by a maritime museum in Stockton, California. Lucid is the last Aggressive-class minesweeper afloat in the United States.

The second warship to be named Lucid by the United States Navy, the keel of AM-458 was laid down by Higgins Inc. Shipyard in New Orleans, Louisiana on 16 March 1953. The vessel was launched on 14 November 1953, sponsored by Mrs. Mary J. Barrow and was reclassified MSO-458 on 7 February 1955. Lucid was commishioned on 4 May 1955, Lieutenant J. H. Graham, USN in command.

After shakedown in the Caribbean, Lucid sailed for the Pacific Ocean, arriving at Long Beach, California on 22 August. For the next thirteen months, she performed mine warfare exercises on the U.S. West Coast, then sailed on her first western Pacific tour on 1 October 1956. During the period from 1956 to 5 November 1963, Lucid sailed on four WestPac cruises and while there performed operations with the U.S. 7th Fleet. In addition to exercises with the 7th Fleet, the minesweeper participated in goodwill programs in the countries she visited. The time between WestPac cruises was spent in mine countermeasure exercises off the southern California coast