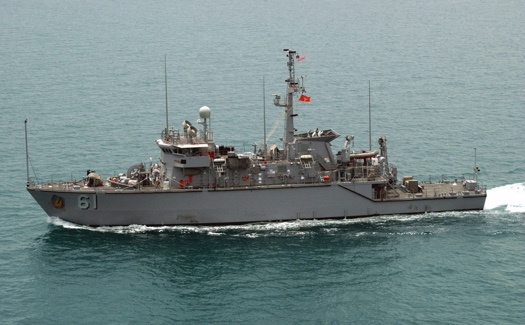 A Minehunter uses an imaging sonar to detect and classify targets and then sends out divers or remotely operated vehicles to inspect and neutralise the threat, often using small charges that are detonated remotely.  As Minehunters will often be operating in close proximity to mines, they are designed so as to reduce their own acoustic and magnetic signatures, two common forms of trigger for mines.  For example, they are often soundproofed by mounting machinery on shock absorbers or by using quiet electrical drive, low magnet electric drives and usually have a wood, fiberglass or non-ferrous metal hull, or are degaused to reduce magnetic signature.

Minehunters are generally small, shallow draught vessels, as they are often called upon to work in enclosed bodies of water such as shipping channels or harbours.  As manoeuvrability in such areas is critical the Voith-Schneider cyclodial propulsor is commonly used, allowing the engine thrust to be transmitted in any direction.  A number of modern vessels use catamaran hulls to provide a large, stable working platform with minimal underwater contact; this reduces draught whilst lowering acoustic transmission and reducing the fluid pressure generated by the moving hull that may otherwise detonate mines with a hydraulic pressure trigger.

She was decommissioned in January 2007 (on a schedule which has all Osprey-class ships fully decommissioned by the end of 2008) and given to the Egyptian Navy pursuant to the Naval Vessels Transfer Act of 2005 (P.L. 109-134).

She was the 11th ship of the 12 Osprey-class coastal mine hunters, which are named for birds of prey. Osprey class are the world's largest mine hunters to be constructed entirely of fiberglass and designed to survive the shock of underwater explosions. Raven's primary mission was reconnaissance, classification, and neutralization of all types of moored and bottom mines in littoral areas, harbors and coastal waterways. She is equipped with a high definition, variable-depth sonar, and a remotely operated, robotic submarine (referred to as a Mine Neutralization Vehicle) used to neutralize mines. As of September 2000, Raven had been forward deployed to Manama, Bahrain. The ship was previously homeported in Ingleside, TX.