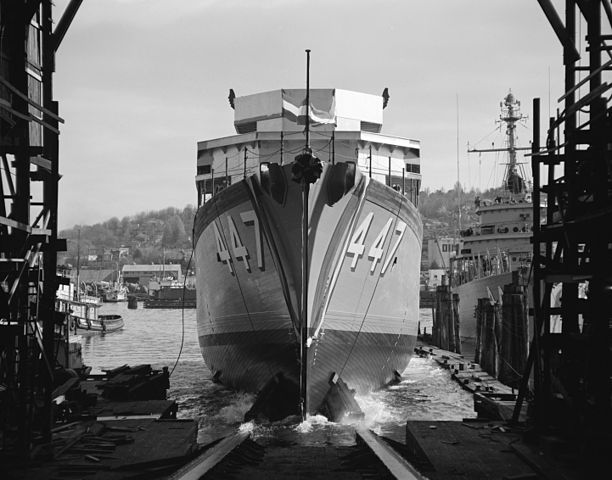 Guide spent the first year of her career in coastwise operations off California. This duty included surveys for the Navy Hydrographic Office in the San Diego-Long Beach area and in San Francisco Bay approaches. She departed Long Beach 1 October 1956 and arrived in Yokosuka 31 October for minesweeping exercises that took her off the coast of Korea, the Marianas Islands, and along the coast of Japan. She returned to Long Beach 15 April for 2 years of training along the western seaboard. On 2 April 1959 she again deployed for the Far East, expanding duties to include joint mine exercises with the naval forces of Japan, Korea and Nationalist China.

Guide returned to Long Beach from her second Asian tour 15 October 1959 and resumed operations along the California seaboard for the next 2 years. On 1 May 1961 she sailed on her third tour of duty with the 7th Fleet, arriving in Yokosuka, Japan, 29 May 1961. Following amphibious and other mine warfare exercises to the coasts of Korea and the Philippines, she returned to Long Beach 14 November. The next 16 months were filled with mine countermeasure and minesweeping training that took her as far north as Seattle and Esquimalt, British Columbia.

Guide was again underway for the Far East 5 April 1963, touching Midway and the Marianas on her way to Japan. She again swept to the shores of Taiwan, Korea, and the Philippines before returning to Long Beach 5 November 1963. Coastwise training occupied her until 5 April 1965 when she sailed for Guam, Marianas Islands, arriving 3 May 1965.

Guide underwent a 3-week upkeep period at Guam. She arrived off the coast of Vietnam 1 June to begin the first of three periods of "Market Time" anti-infiltration patrols to deny movement of war supplies to the Viet Cong. Her first patrol terminated 31 June. Subsequent patrols were carried out 25 July-12 August 1965 and 18 September-5 October 1965. Following a liberty call at Hong Kong, she paid a 2-day visit to Iloilo City, Panay, Republic of the Philippines. She opened for general visiting 25-28 October and contributed books and food to assist in America's people-to-people program of international friendship.

Guide joined in combined mine warfare exercises with units of the Philippine Navy before setting course for the Marshalls, Hawaii, and back to Long Beach, arriving 14 December 1965. The minesweeper operated along the West Coast throughout 1966 and sailed for the Far Fast early in 1967. On 1 March she was off the coast of Vietnam laboring to keep clear the shipping lanes which supply Allied fighters in that war-torn land. She continued to perform this vital duty past mid-year, reaffirming her right to the proud name Guide. [Note: Guide was struck from the Navy list on 9 July 1972 and sold on 1 January 1973.]