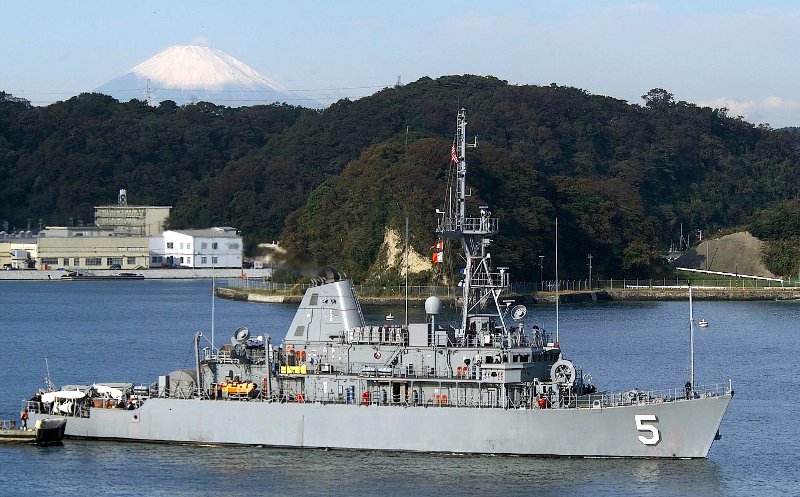 Was an Avenger-class mine countermeasures ship of the United States Navy, and the second Navy ship to bear that name.

On 17 January 2013, Guardian ran aground on Tubbataha Reef in a protected area of the Philippines in the middle of the Sulu Sea. The vessel was turned and pushed further onto the reef by wave action. Unable to be recovered, the vessel was decommissioned and struck from the U.S. Naval Vessel Register on 15 February 2013.

In January 2013 the USS Guardian MCM 5 ran aground on the Tubbataha Reef in the Sulu Sea.  Because of the damage sustained during the grounding this warship had to be removed from the reef and was decommissioned a month later. 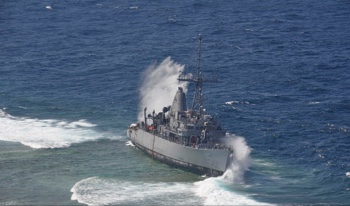 SULU SEA (Jan. 29, 2013) Heavy waves crash against the grounded mine countermeasure ship USS Guardian (MCM 5), which ran aground on the Tubbataha Reef in the Sulu Sea on Jan. 17. The grounding and subsequent heavy waves constantly hitting Guardian have caused severe damage, leading the Navy to determine the 23-year old ship is beyond economical repair and is a complete loss. With the deteriorating integrity of the ship, the weight involved, and where it has grounded on the reef, dismantling the ship in sections is the only supportable salvage option. The U.S. Navy continues to work in close cooperation with the Philippine Coast Guard and Navy to safely dismantle Guardian from the reef while minimizing environmental effects. 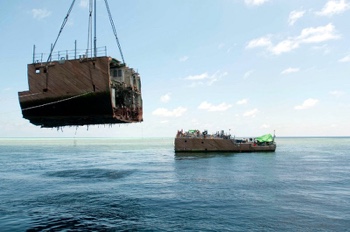 SULU SEA (Jan. 28, 2013) The U.S. Navy contracted Malaysian tug Vos Apollo removes petroleum-based products and human wastewater from the mine countermeasure ship USS Guardian (MCM 5), which ran aground on the Tubbataha Reef in the Sulu Sea on Jan. 17. No fuel has leaked since the grounding and all of the approximately 15,000 gallons on board Guardian was safely transferred to Vos Apollo during two days of controlled de-fueling operations on Jan. 24 and Jan. 25.

SULU SEA (March 12, 2013) The U.S. Navy contracted vessels Jascon 25 and the tugboat Archon Tide are positioned next to the Avenger-class mine countermeasures ship ex-Guardian (MCM 5) during salvage operations. Guardian ran aground on the Tubbataha Reef Jan. 17. The U.S. Navy continues to work in close cooperation with the Philippine authorities to safely dismantle Guardian from the reef while minimizing environmental effects.

SULU SEA, Philippines (March 27, 2013) - The U.S. Navy contracted crane vessel M/V Jascon 25 removes a hull section from the mine countermeasure ship Ex-Guardian (MCM 5), which ran aground on the Tubbataha Reef Jan. 17. The U.S. Navy and contracted salvage teams continue damage assessments and the removal of equipment and parts to prepare the grounded ship to be safely dismantled and removed from Tubbataha Reef. The U.S. Navy continues to work in close cooperation with the Philippine authorities to safely dismantle Guardian from the reef while minimizing environmental effects.

On 8 April 2013 it was reported that the U.S. Navy had turned over digital navigation charts and other relevant documents and data of Guardian to the Philippine Maritime Casualty Investigating Team (MCIT) and responded to various "technical and substantive" queries. The MCIT will conduct its own independent investigation and make recommendations about how to avoid such incidents in the future. On 26 July 2013 it was reported that a chart produced by the National Geospatial-Intelligence Agency was inaccurate by up to 8 nautical miles (15 km; 9.2 mi). This chart was used by the crew of the Guardian, and played a significant role in the grounding. However, significant errors by the crew and commanding officers were also reported, including that they should have noted the inaccuracies in comparison to other charts.

Original estimates were that 4,000 square metres (43,000 sq. ft.) of reef was damaged but a survey done after removal, by the World Wide Fund for Nature - Philippines and the Tubbataha Management Office, measured the damage area at 2,345.67 square metres (25,248.6 sq. ft.). On January 20, 2015, the United States Government paid to the Philippine government a total of 87 million Philippine pesos, or US$1.97 million – 59 million Philippine pesos for the damage and another 29 million pesos to reimburse for services provided by the Philippine Coast Guard. 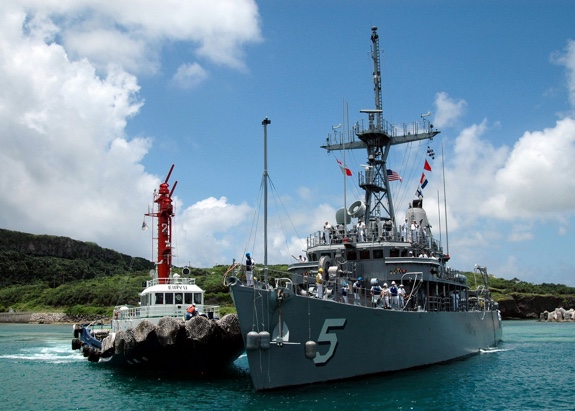