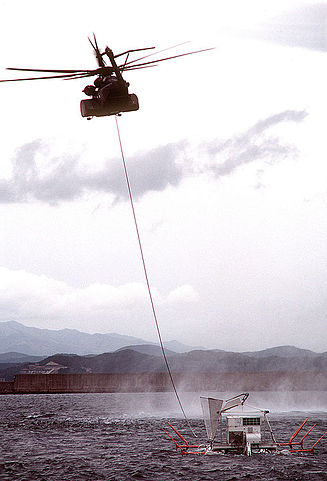 An MH-53E Sea Dragon, from Helicopter Mine Countermeasure Squadron (HM) 15, performs mine countermeasure training using the MK-105 sled. HM-15 is deployed aboard the multipurpose amphibious assault ship USS Wasp (LHD 1). Wasp is conducting mine countermeasure exercises to demonstrate the U.S. Navy's ability to defend against mine-laying operations and ensure open access to sea lanes.  The practice of the removal of explosive naval mines, usually by a specially designed ship called a minesweepers using various measures to either capture or detonate the mines, but sometimes also with an helicopter made for that purpose.

The Sikorsky CH-53E Super Stallion is the largest and heaviest helicopter in the United States military.  The less common MH-53E Sea Dragon fills the United States Navy's need for long range minesweeping or Airborne Mine Countermeasures (AMCM) missions, and perform heave-lift duties for the Navy. In the 1990's during Operation Desert Storm MH-53E shipboard based Sea Dragons were used for mine clearing operations in the Persian Gulf off Kuwait.