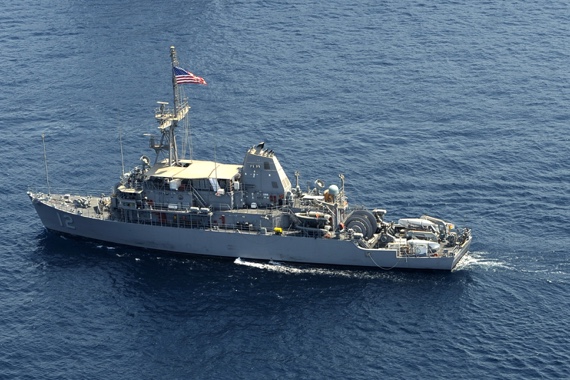 Is an Avenger-class mine countermeasures ship in the United States Navy.

She was built by Peterson Shipbuilders, Sturgeon Bay, Wisconsin, built her. Ardent is homeported at San Diego, California and is part of the U.S. 3rd Fleet.

Her Command History for 1993-94 indicates that from 1 January 1994 to 31 October 1994 ARDENT was assigned to Mine Countermeasures Group 3 under Captain Richard Owens. On 1 November 1994 a reorganization of the U.S. Navy's Mine Countermeasures Community took place. Commander, Mine Warfare Command ceased to be Type Commander for the ships homeported in Ingleside, Texas; and a new entity, Naval Surface Group Ingleside, was created to serve as local agent for the new Type Commander, Commander, Naval Surface Forces Atlantic. NSG Ingleside was also intended to give the Ingleside ships "cradle to grave" assistance and supervision. In the new organization, ARDENT was assigned to Mine Countermeasures Squadron 3 (MCMRON 3), still under Captain Richard Owens. ARDENT remained in MCMRON 3 through the end of 1994.

Ardent was featured in a front-page article in the 31 July 2006 edition of DefenceNews that pointed out that Ardent and USS Dextrous were suffering from equipment failures that made them unable to perform their role.