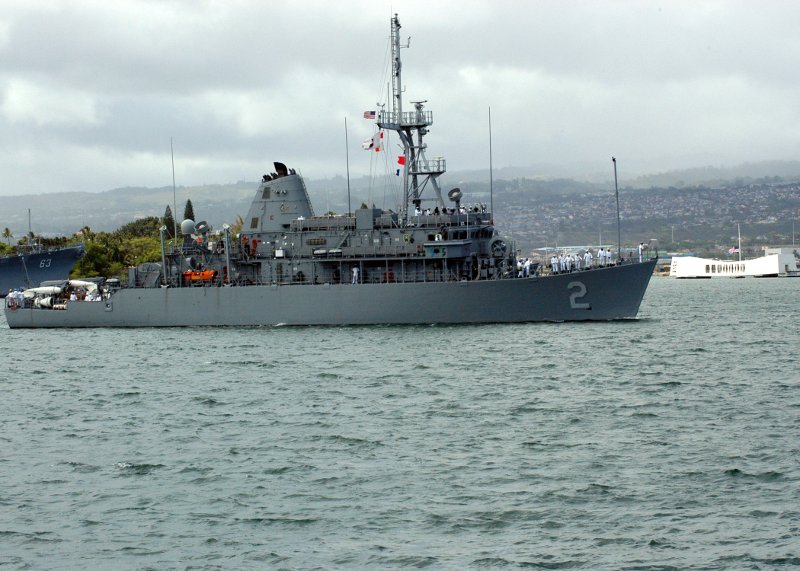 The USS Defender (MCM 2) Was a naval Avenger-Class mine countermeasurers ship constructer at Marinette Mariner Corp, in Marinette Wisconsin.  The USS Defender was the second of 14 Avenger CLass mine countermeasureres sships designed to be used as ocean minesweeoers assisting US naval fleet operations arounf the globe.  The development of Avenger Class ships came about as the United States Navy began in the 1980's to developetheir mine countermeasurers program to improve mine-warfare capabilities which wold make amphibious assaults moew accessible and provide the US Navy access to currently restricted waters around the globe.  This development produced 2 new classes of ships,the Avenger as well asthe Cardinal class, as well as minessweeping helicopter and three mine types.

The formal commencement of construction for the USS Defender was on December 1, 1983 and it was later completed and launched on April 4, 1987.  The USS Defender was 224 ft. long; the hull was constructed of laminated wood structure with composite fiberglass exterior sheathing.  The reason for using this material in the hull was due to the fact that wood and glass have low magnetic and acoustic signatures and are strong yet lightweight and capable of withstanding blasts from detonated mines. When the ship was fully loaded it weighed in at 1250 long tons.  The ship is powered by four main diesel propulsion Waukesha L-1616 engines and carries surface search radar and variable-depth mine hunting sonar.  Armament Included six 50 cal. Machine guns, four 7.62mm machine guns and two Mk 19 grenade launchers. The Avenger class ships were to crew 6 officers and 76 enlisted. With all of this intact the USS Defender, like the other Avenger class naval ships, was capable of hunting down, classifying, and destroying naval mines.

The USS Defender was assigned four different homeports in its time in service, Little Creek, VA, Ingleside, TX, San Diego, CA, and Sasebo, Japan.  Serving from these four homeports allowed the Defender to participate in deployments with the United States Naval 3rd, 6th, and 7th fleets.   Throughout its lifetime the USS Defender took part in multiple NATO exercises, assisted in a Search and Rescue

In October 2014 the USS Defender was officially decommissioned after 25 years of service.