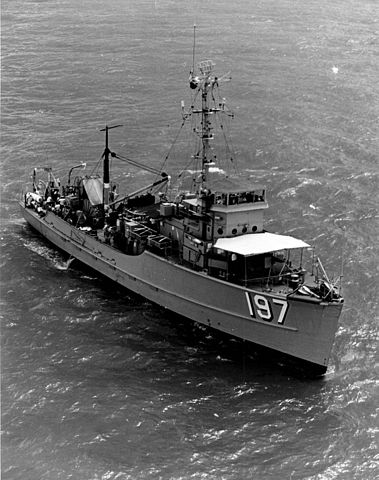 Is a term used by the United States Navy to indicate a minesweeper intended for coastal use as opposed to participating in fleet operations at sea.  Because of its small size—usually less than 100 feet in length—and construction—wood as opposed to steel—and slow speed—usually about 9 or 10 knots—the coastal minesweeper was considered too fragile and slow to operate on the high seas with the fleet.  Minesweping, in conjunction with fleet activities, was usually relegated to the diesel-driven steel-hulled AM-type minesweepers, later to be replaced by the wood-hulled MSO-type minesweeper with aluminum engines

After fitting out and training, USS Parrot MSC 197, along with four other minesweepers, participated in cold weather minesweeping exercises in the North Atlantic.  Parrot then moved to Cahrleston, South Carolina, her base for exercises and training operations in the Caribbean and the Gulf Stream.  She remained there until January 1958, when she sailed north to participate in her first NATO exercise.  In February 1958, Parrot was dispatche to participate in a search for a nuclear weapon jettisoned by a bomber.  Upon completion, she returned to the Caribbean area where she remained into 1961, conducting training exercises and serving as training ship for the Mine Warfare School.  In March 1961, she assisted in helping to evaluate the new helicopter method of minesweeping.  After completion of this duty, she returned to her training and patrol duties.

On 22 October 1962, Parrot was ordered to get underway, with no destination being specified. She was later directed to assist in the Cuban Quarantine operation.  After this duty, she returned to Charleston. Once again she resumed her training and patrolling duties.