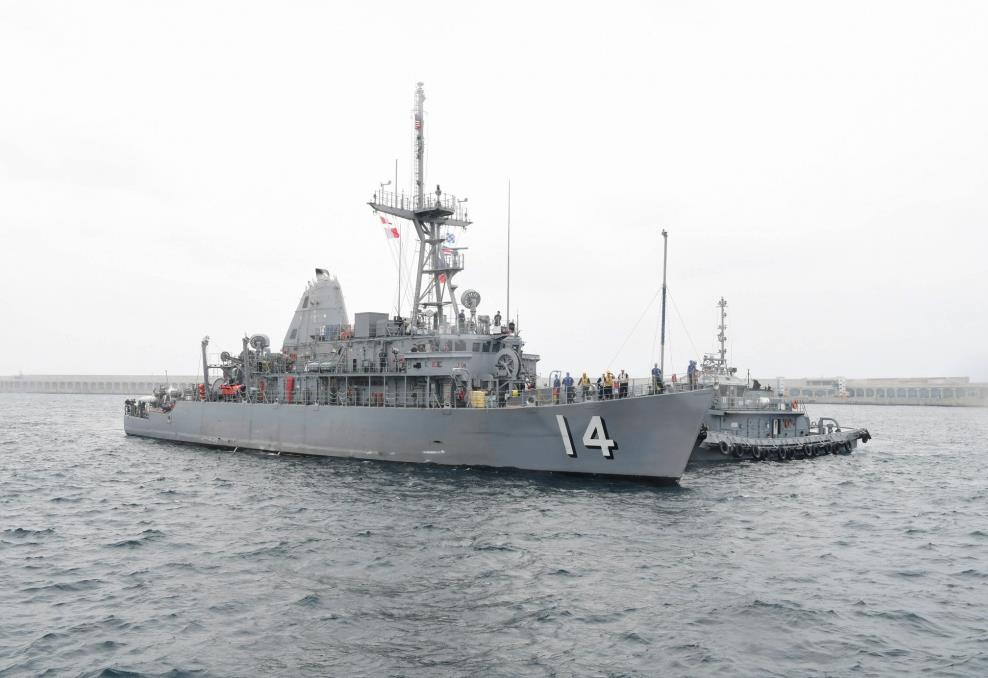 USS Chief is named to honor the service and tradition of the Chief Petty Officers of the United States Navy. Construction and fitting-out was done in Sturgeon Bay, Wisconsin, and the ship was accepted on behalf of the United States Navy, and placed in commission by Lieutenant Commander Timothy S. Garrold, USN, her first Commanding Officer, on 8 July 1994.

Navy blue and gold are the traditional colors of the United States Navy. The mine in the center of the shield represents the mine countermeasures mission of the Chief while the crossed Officer’s sword and Enlisted cutlass symbolize Surface Warfare excellence. The fouled Navy anchor, insignia of a Chief Petty Officer, is further symbolic of the United States Navy’s leadership and commemorates the fact that Chief was launched on 12 June 1993 during the centennial of the Chief Petty Officer Corps. The three silver stars above the fouled anchor depict the leadership and service of the Master Chief Petty Officers of the Navy (MCPON) – past, present and future and honor the ship’s Sponsor.

The stars are also arranged in the same manner about the anchor as the international navigational symbol for lights and shapes about the mast; signifying a vessel engaged in mine clearance operations. There are 84 links in the fouled anchor chain, one for each plank owner, the ship’s sponsor, and the Matron of Honor. The trident atop the crest denotes sea power. The blue and white surface from which it rises represents both the sea, upon which the ship was born.

Surrounding the trident are seven stars representing the seven Battle Stars won during the Second World War and the Korean War by the first ship to bear the name “Chief”, USS Chief (AM 315). The five above the trident for World War II and the two alongside for the Korean War.