The Avenger-class ships were designed to have very low acoustic and magnetic signatures to avoid detonating mines. While most modern warships have steel hulls, the Avengers have wooden hulls with an external coating of fiberglass. They are equipped with sophisticated minehunting and classification sonar as well as remotely operated mine neutralization and disposal systems.

Warrior was laid down on 25 September 1989 at Peterson Builders in Sturgeon Bay, Wisconsin, She was launched on 8 December 1990, and was commissioned on 7 April 1993.

On 7 August 1998, Warrior rescued four men from a sinking boat off the coast of Charleston, South Carolina. "We were in the right place at the right time," said Chief Boatswain's Mate (SW) John Valdez.

In June 2005, Warrior, along with four other mine countermeasure ships, participated in a mine warfare exercise off the coast of Florida. The other ships involved were Gladiator, Shrike, Oriole and Cormorant.

On 26 February 2013, 7th Fleet announced that Warrior would be transferred from 5th Fleet in Bahrain to 7th Fleet in Sasebo, Japan to replace Guardian, which had recently been decommissioned after running aground in the Philippines. 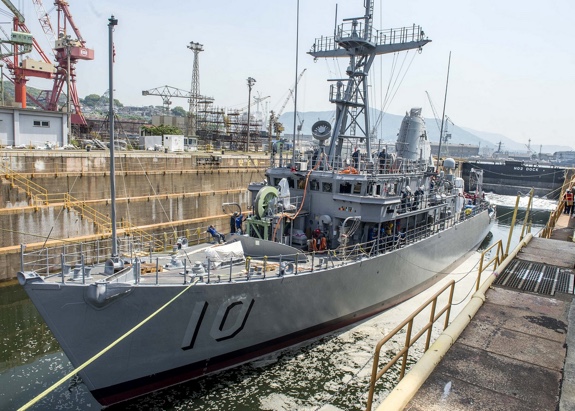